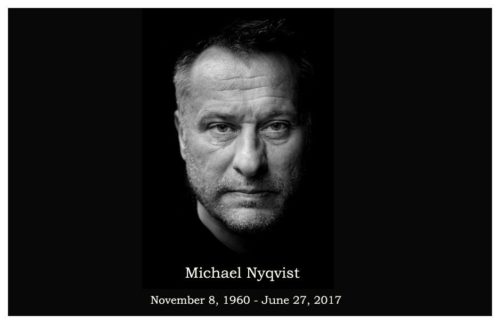 Actor Michael Nyqvist, who starred in the film adaptation of Stieg Larsson’s The Girl with the Dragon Tattoo, has died aged 56, his family has announced.

Nyqvist played journalist Mikael Blomkvist in that film and its sequels, which formed the Millennium Trilogy.

The Swedish actor died on Tuesday after suffering from lung cancer for a year, according to a family statement.

Nyqvist’s love of the arts was “felt by all who had the pleasure of working with him”, the family added.

“Michael’s joy and passion were infectious to those who knew and loved him,” his family said. “His charm and charisma were undeniable.”

They said Nyqvist had left a “huge void behind him”, local media report.

His death was announced “with deep sadness” by a family representative who said that “one of Sweden’s most respected and accomplished actors” had “passed away quietly surrounded by family”.

Gerard Butler, who worked with Nyqvist on yet to be released action thriller Hunter Killer, said he was “right up there” among the people he had acted alongside.

In an emotional tribute on Instagram, the Scottish actor remembered his co-star’s “incredible talent… child-like qualities… humility and warmth”.

“It breaks my heart we’ll never get to sit together to watch this movie,” he said, saluting the “dignity and integrity and fun” Nyqvist had brought to the set.

“He was a sweet man with an infectious smile, a great dad and a fine actor,” he wrote on Instagram.

Born in Stockholm in 1960, Nyqvist began his training at the Malmo Theatre Academy in Sweden.

He was best known for his role in Dragon Tattoo (2009), starring as the investigative reporter who teams up with feisty computer hacker Lisbeth Salander, played by Noomi Rapace.

In a subsequent US version of the film, his role was performed by James Bond actor Daniel Craig.

Nyqvist later appeared in a number of Hollywood blockbusters. He played the villain alongside Tom Cruise in Mission: Impossible – Ghost Protocol and starred as Viggo Tarasov in John Wick with Keanu Reeves.

He went on to star in the 2015 film Colonia, opposite Daniel Bruhl and Emma Watson.

Nyqvist also wrote an acclaimed memoir, Just After Dreaming, published in 2010, about his earliest childhood memories following adoption and how he later traced his biological parents.

He is survived by his wife, Catharina Ehrnrooth, and their children, Ellen and Arthur.